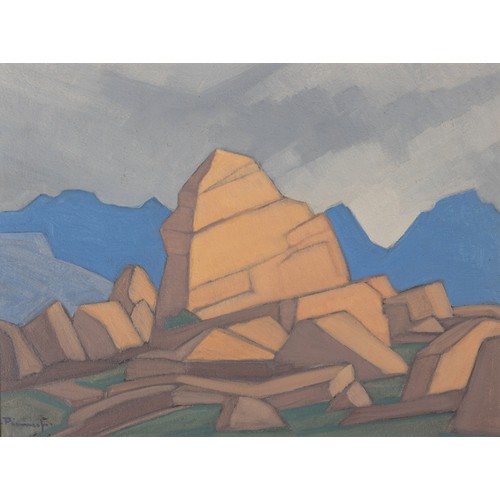 
Unusual, but simultaneously unmistakeable, Malutis (Lot 439) serves as a wonderful example of one of South Africa’s most well-known artist’s visions of the country. With each and every Pierneef, the artist’s pure enamorment with the South African landscape is translated through his palette and composition. This particular work is monumental in its approach, with the artist’s clear understanding of linearity and space resulting in a piece with a deceptive sense of scale which seems to transcend the 30 by 40cm board, while maintaining its sense of harmony and tranquility.

Pierneef’s deep knowledge and understanding of indigenous landscapes allowed him to capture natural forms through is use of colour, form and paint application. While Malutis is simplified and visualised through a geometric rendering of space, the use of terracottas and mauve-greys translates light and shadow and indicates a sense of space and depth. As is often seen in his work, an object or obstacle is placed in the immediate foreground of the piece, clearly dividing the plains into foreground and background.

We know that Pierneef often returned to areas of the country from which he drew the most inspiration, which is the case with the Maluti (or Maloti) mountain range, which extends from the Free State into Lesotho. The artist first visited Lesotho, then Basutoland, in 1922, revisiting the area on many occasions throughout his career. Perhaps the most notable visit was for the completion of Malutis, Basutoland, one of the 28 commissioned Johannesburg Station Panels in 1929, which were presented in 1932. Pierneef travelled to Lesotho again in 1936 and wrote in a letter to friend A.C. Bouman that he had “found wonderful designs for stylised work in Basutoland”, which we believe is reflected in this work. -AC 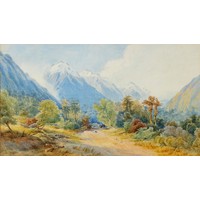 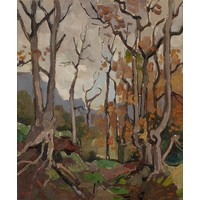