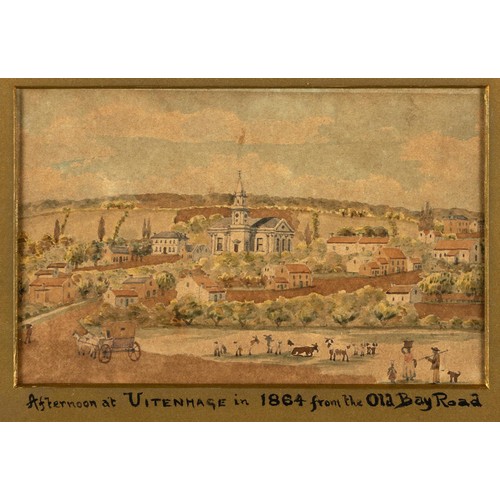 AFTERNOON AT UITENHAGE IN 1864 FROM THE OLD BAY ROAD

A few small watercolours of Uitenhage in a similar style are held by South African museums, but this is first to come up for sale in decades. All the watercolours include a wagon, a washerwoman and a child with a tin on her head in the foreground. The attribution is uncertain since none of the works are signed, with the exception of the one in the Uitenhage Museum. It is titled “First Uitenhage Library Building 1840” and signed “M. Nilsen”.

The five in the Johannesburg Museum Africa were obtained from 1936 to 1961. The first was acquired from the Estate of the late Dr. J.G. Gubbins, an important Africana collector whose books are now in the Gubbins Library at the University of the Witwatersrand and his pictures and other objects became the foundation of Museum Africa. The other four were purchased from European dealers in Africana. However, all five have a distinctive style that differs from artists working at the time. Possibilities including George Duff, Charles Bell, and H.C. De Meillon have been discounted.

The construction of the Dutch Reformed Church in 1843, and the parsonage in 1852, assists with dating. The watercolour offered for sale is dated 1864 on the frame and both the D R Church and the Parsonage are visible. Both buildings also appear in one of the works held by the Museum Africa. Therefore the dates tally, making Nilsen the most likely candidate. Unfortunately nothing is known of M Nilsen and only the watercolours and one example of his or her signature remains. 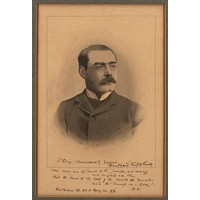 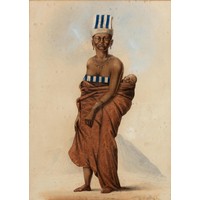