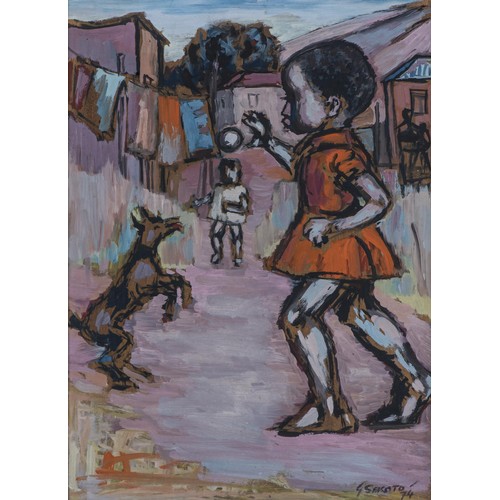 Gerard Sekoto's contributions to South African art were vital elements in South Africa's cultural development in the twentieth century. He wrote that “Art is a human virtue and I have given my whole self to it, for it promotes understanding amongst races rather than destroy it.”

Gerard Sekoto’s attraction to the contemporary lifestyle in the big cities prompted his move to Johannesburg in 1939, where he lived in the vibrant multiracial community of Sophiatown. While living there, the artist’s works mainly depicted the lifestyle and scenery of the township, often commenting on the social conditions and underlying mood of the community.

The artist’s work displays a sensitivity, dignity, and a sense of calmness, as can be seen in the two works offered here, Young Girl With Her Dog (Lot 367), and Girl’s Playing (Lot 366), despite the harsh realities of life under apartheid. The artist has respectively used oil and gouache to create two dynamic images that capture a moment of everyday life, and celebrate these universal moments of humanity as embodied in the innocence of childhood.

In spite of the oppressive nature of life for an African artist living in South Africa. Sekoto managed to achieve recognition during his years living in Sophiatown, District Six and Eastwood, respectively. His paintings from this period evoke the vibrancy and energy of the cultural activity and tension of the townships and serve as historical records of a way of life following the destruction of these areas. He was also the first African artist to have a work acquired by a South African museum when one of his pieces was purchased by the Johannesburg Art Gallery in 1940.

Gerard Sekoto went into self-imposed exile in France in 1947 where he worked as an artist and musician until his death in 1993, producing a rich and varied body of work during this time that continued to celebrate his commitment to humanity and inclusivity. He was designated a Chevalier des Arts et des Lettres by the French government and posthumously received the Order of Ikhamanga for achievement in the arts from the South African government. In 1989 the Johannesburg Art Gallery held a retrospective exhibition, and the University of Witwatersrand honoured him with doctorate.
-LC 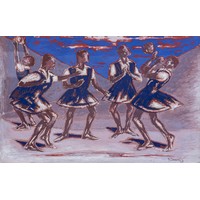 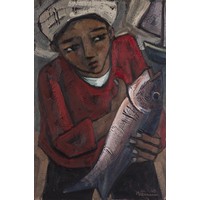